Board Game Review by: :
Tony Mastrangeli

We review Horrified, a cooperative board game published by Ravensburger. In Horrified, players must work together to defeat the classic movie monsters that are terrorizing the villagers. 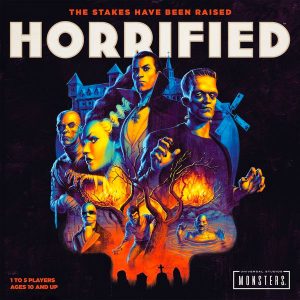 When it comes to monsters, they come in all shapes and sizes. Be they Lovecraftian horrors dwelling from outer space or gibbering mouthers in your DnD campaign, monsters have only been limited by a person’s imagination. Yet you’d be hard-pressed to find monsters more iconic than the Universal Studios ones. Frankenstein, Dracula, The Wolf Man, and others have been terrifying moviegoers since the 1930s.

If you are a fan of these classic pieces of cinema than take note. Today, we are going to be looking at Horrified, a game that put you in the shoes of heroes attempting to stop these monsters from terrifying the local villagers.

Each of the six monsters in Horrified will have unique conditions that players must achieve in order to defeat them. In a standard game, you’ll face off against 3 of these monsters (2 for easy, 4 for hard). Each player chooses a unique hero to control and the board is seeded with a dozen items.

On a player’s turn, they can take as many actions as their Hero card notes (3-5). Actions can be spent moving the hero, moving villagers, picking up or trading items, advancing a monsters’ task, or defeating a monster.

Almost all monsters require some combination of items to advance that monster’s task. You might be using red items to smash Dracula’s coffins, or using yellow items to try and break the mummy’s curse.

After a player has taken all of their actions, they then draw a monster card. The card will list how many items are added to the board, a possible event that may need to be resolved, and which monsters move and attack. Attacks are handled via dice rolls. If a villager is hit, they die and the terror track increases. If a hero is hit, they may discard any item to avoid being killed.

Turns go by in this manner until all monsters have been defeated, or the players lose either by having the terror track reach its limit or the monster deck runs out of cards.

There is a lot of things to love about Horrified. Ravensburger did an excellent job in not only creating a game that’s fun to play, but uses its theme well. From the moment you open the box, there is text on the back of the game board that greets you to help set the mood. This carries through all the components with the excellent illustrations to the fantastic looking game board. Horrified is a game that fully embraces its theme and never looks back.

This trend definitely carries through to the monsters, each of which will have you doing different tasks to defeat them. Dracula will have you trekking to the different corners of the board to smash his coffins, while the Creature from the Black Lagoon will task you with slowly advancing the boat before you can take him down. Most all the monsters carry the theme of collecting items, using them in some way, before finally defeating them with items.

Throughout all of this is the pickup and deliver gameplay mechanic. The items around the board are the linchpin of the gameplay in Horrified. You’ll need to head to different locations to grab items (in three different colors) and then take them to specific locations to accomplish monster tasks (or to the monsters themselves).

While the gameplay was smooth and works really well, I did kind of find myself wishing for just a tad more variety in this. All actions are going to have you going somewhere to get an object and bring it somewhere else. Even the villagers require you to escort them to their safe space. Thankfully the monsters are unique enough that you don’t fully feel like you are doing the same thing over and over, but a bit more variety here would have been a welcome change.

The other thing to be aware of with Horrified is that the game can be prone to random swings of luck. From having to wait on specific colored tokens to appear to the dice rolls of monsters, lady luck can definitely have an impact on the gameplay. In fact, I had one monster card pop out a villager, and then immediately have that monster attack and kill said villager on the same action. Those moments can definitely cause some frustration.

Horrified also did a great job of making the game very accessible. The rules are simple to teach and learn, and players will be up and running in no time. In fact, one of the great things about the game is that there are multiple difficulty levels. Easy mode has you playing with two monsters, standard is three, and hard has you facing off against four monsters. I’ve found that 3 monsters present enough of a challenge that when I win, it’s just barely, and when I lose, it’s usually one of those “if only I had one or two more turns” kind of a situation.

Horrified managed to pull in a theme that’s certain to garner a ton of attention and not only make a game that uses it well but is a blast to play as well. The gameplay is smooth, easy to learn, and accessible to gamers and non-gamers alike. While the pickup and deliver mechanics worked well in the game, I could use used just a tad more variety there. Still, the 6 different monsters, each of which requires tackling them in a different way, goes a long way to giving the game some solid replay value. Just be aware that Horrified can be a bit random at times.

If you are a fan of the monsters from the years gone by, then Horrified is an easy decision. Grab this gem and see if you can teach Frankenstein and his bride how to love…before it’s too late.

Misses:
• Can be prone to swings of luck
• Core gameplay can get a little repetitive