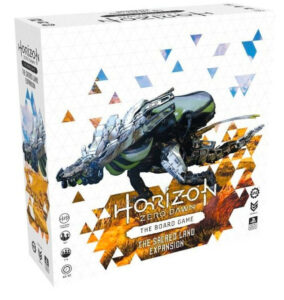 Last year we were able to dive into the Horizon Zero Dawn: The Board Game from Steamforged Games. Based on the best-selling video game, this board game tasks 1-4 players to enter the wasteland and hunt down robotic dinosaurs. You can read the full review of the base game here, but the short of it is that I really enjoyed it, with my main criticism being that it lacked a bit in variety. Lucky for me a large stack of expansions has since arrived on my doorstep. When I say large, I’m not kidding either, it was like a 5’ high stack of boxes.

These expansions—which I called “hunter expansions” because they all come with new hunters—come in four different sets (and one that’s a little different that we’ll talk about in a bit). But each of these expansions focuses on one of the main tribes of Horizon Zero Dawn: The Nora, The Oseram, The Banuk, and The Carja. But enough preamble, let’s talk about the games. 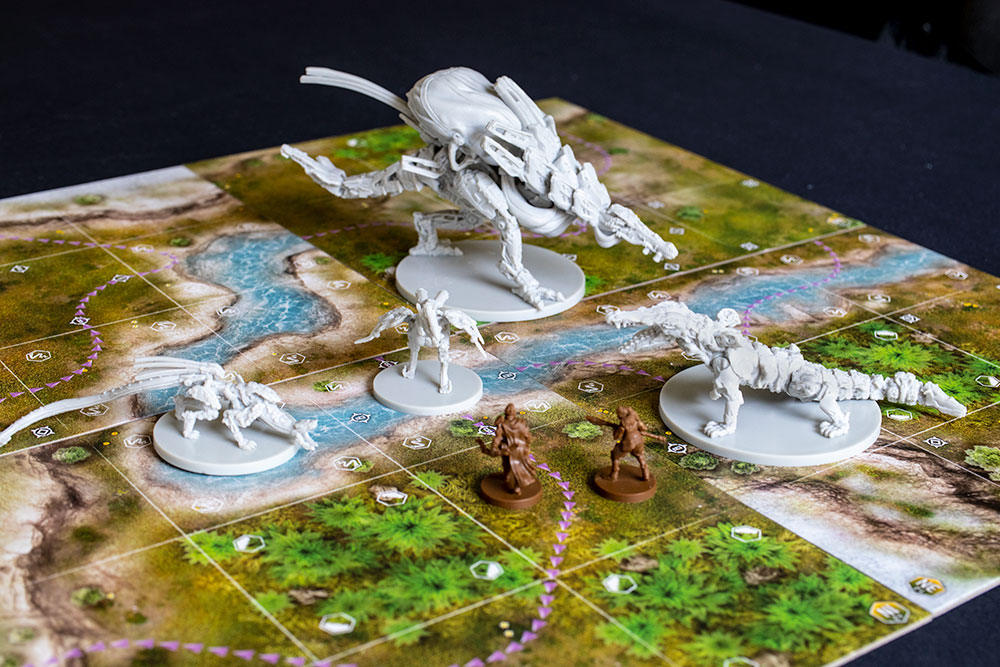 Each of these expansions will be following a sort of template. Included in each are 2 new hunters, some encounter tiles, a few merchant cards, and a brand-new hunt deck with all 3-5 new monsters to take on.

The first of the new hunters is the Nora Scavenger, who is really good at getting salvage to spend, and can also discard for free craft actions. The other hunter is the Trapper, which as you might guess, is really good at laying traps. Their special power gives them a free distract action. Their deck features bonuses while hidden and a variety of traps. They also can place their traps without needing to use a tripcaster, but instead, can use a new “set traps” action.

The new machines to encounter are the Redeye Watchers, Longlegs, Stalkers, Snapmaws, and Bellowbacks. Even though the Bellowbacks are the biggest miniatures in the expansion, the Snapmaw is the target of the hunt, which is no pushover. It has several melee attacks and even some pulse attacks. The Bellowbacks come in two different flavors: fire and ice, so better get those defenses ready. 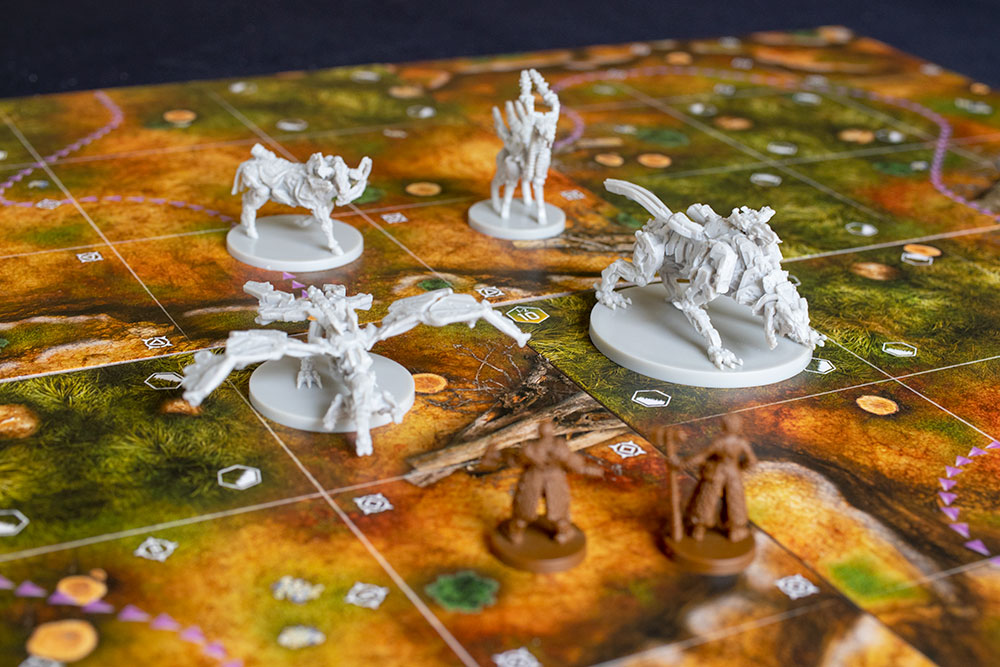 The Forge and Hammer

Heading over to the Oseram lands, you now get to control the Tinker and Mixologist. The Tinker is all about area of effect attacks (AoE). They get a blast sling and a bunch of ammo that will use AoE. Their special ability allows them to target squares without machines in them, making sure they are not useless when only facing a single monster. However, these guys excel at higher player counts when there are more groups of monsters. The Mixologist, on the other hand, is all about conditions. She can infuse any of her attacks with freeze, fire, or frost. She can also “hot potato” conditions from one enemy to another.

For new monsters to face, you get to take on Chargers, Lancehorns, Glinthawks, and Ravagers (who are the target of the hunt). The Ravager has a nasty range cannon that can actually be knocked off and picked up by a player. It rolls 4 orange dice and uses the top card of your deck as ammo. The Glinthawk is one of the first flying enemies you’ll encounter. Once its alert it can’t be hit by melee attacks or traps. 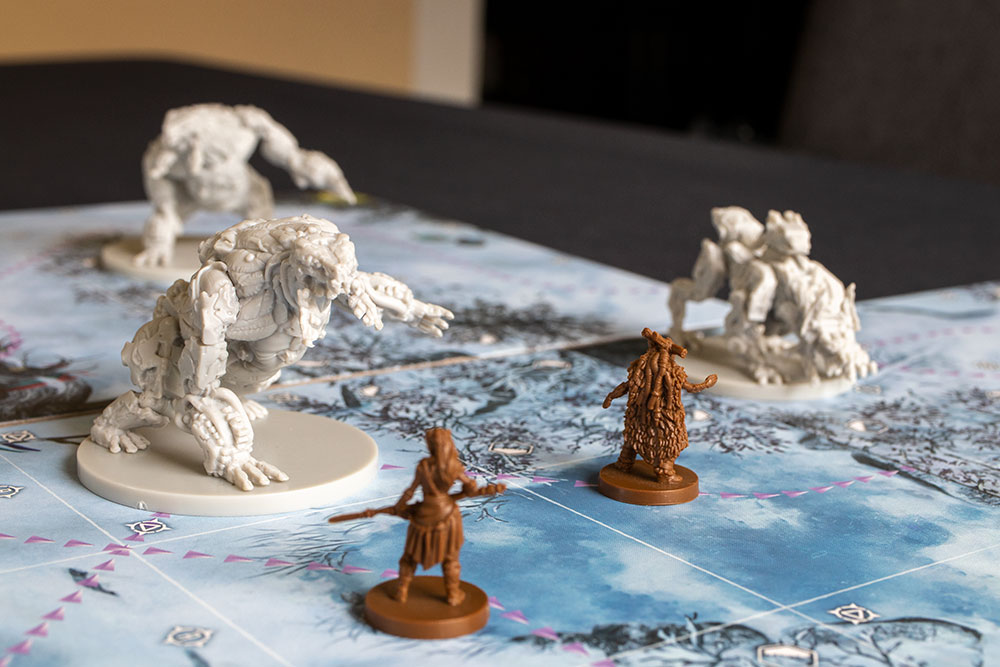 In the snow-covered lands, you get to control a Banuk Shaman and a Veteran. The Shaman is a healer that can quickly cycle cards in their deck. They are not quite a support character but can grant free craft actions and their ice canon/thrower offers a lot of variety. The Veteran’s special ability is that Stamina cards don’t count towards their hand size. Many of their attacks and special powers trigger off discarding stamina cards, so you want to make sure to get as many of those as possible.

For enemies, your Hunters Call will have you seeking out the Frostclaws. Along the way, you’ll take on scorchers and demonic versions of the core game Scrapper, Watcher, and Shell-Walker. The only change to the demonic versions appears to be demonic resistance, which helps the monsters avoid conditions and gives them one extra hit point. This feels a little weak to me and would have liked to see the designers put a bit more effort into tailoring the demonic machines to the lore. Alas. Finally, the setup for the Frostclaw battle is either really hard for 1-2 players or it has a typo as it has you facing two of these monsters.

Soldiers of the Sun

And then the Carja get their due. The Noble and Rogue are the hunters introduced here. The Noble is great at shopping and getting salvage. Their special power allows them to reduce the cost by 1 during every merchant step. Combat-wise, they feel pretty standard without much that stands out. The Rogue has many tricks to get them blazing suns, glory, free salvage, and the Leader token. However, if you play cooperative mode, many of their special powers will be somewhat useless, which kind of sucks.

The new hunt here is against the Behemoth, with battles against Broadheads and Tramplers along the way. The Behemoth is a brute of a machine that has a variety of attacks that you’ll want to disable if you hope to survive. 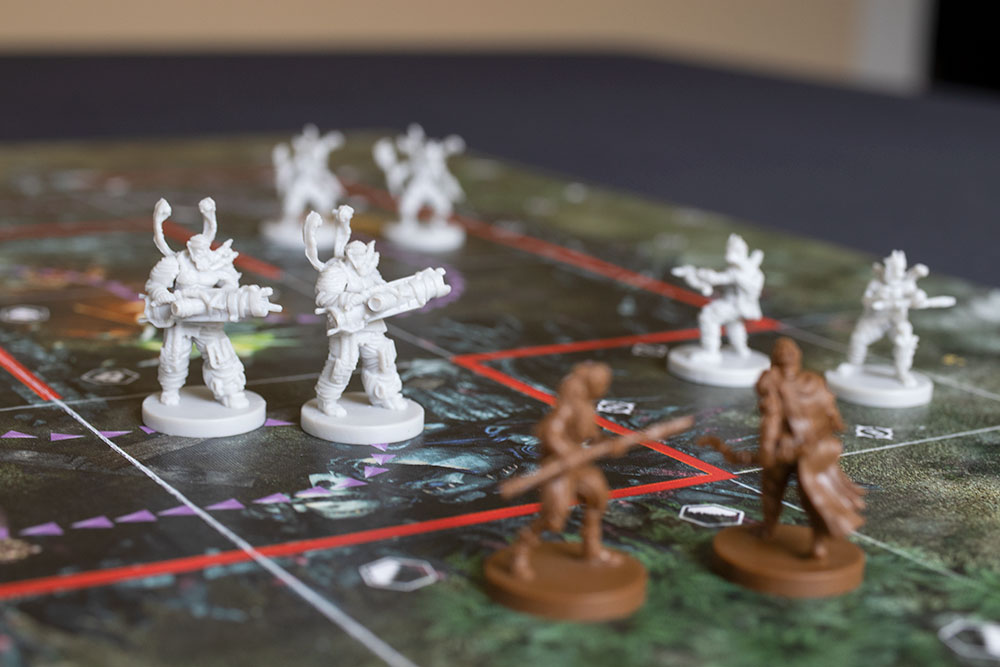 Finally, let’s talk about the Lawless Badlands expansion. Which breaks from the mold of the previous four. This one doesn’t come with any new hunters or machines. Instead, it has 1 tile of a bandit camp and a half dozen different bandits to face. The bandit encounters can be shuffled into any hunt deck to randomly add a bandit encounter to your hunt. We actually found the bandit encounters to be pretty easy if you can stop them from sounding the alarm. When not alert, they simply patrol. However, since most have only 3-4 hit points, they are pretty easy to one shot.

Game Experience with the Expansions:

Reviewing these expansions is fairly easy because it boils down to being a lot more of what you’re already used to. Some of the expansions add in some new concepts, like the trap action or a few new special abilities. But at the end of the day, I’ve been wanting more variety and even a bit more in the difficulty realm for the game, and these expansions all deliver. Do you need all 5 of them? Probably not. They are all very similar in terms of what you get: new hunters, new maps, new enemies, and a few random cards to fill out your merchant deck.

If I had to rank them in the order I like them, it’s probably how I have them arranged above. The Sacred Lands was my favorite, follows closely by the Forge and Hammer. The Frozen Wilds are good hunters, but the demonic monsters are definitely lackluster. And the Carja Rogue being mostly unplayable for coop (which is our preferred way to play) basically takes it out of consideration for us (plus it only comes with 3 new monsters). And the Lawless Badlands is fine, but not one we’d reach for often. The two encounters in there are ok every now and then, but not one you’ll want to fight every time.

If you are a fan of the Horizon Zero Dawn: The Board Game and were looking for more variety, you’ve got it here. Even just getting 1-2 of these expansions will give you a lot more options when setting up your game. And after you’ve tried out the hunt from the expansion, you can mix all the hunt cards together and give you a random fight every time.

Next, I’ll be looking at the big monster expansions, so keep your eyes peeled for that upcoming review.