Board Game Review by: :
Andrew Smith 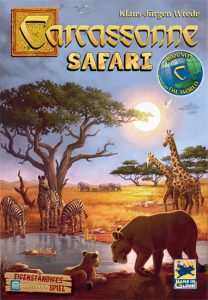 As far as modern board games are concerned, Carcassonne is as close to a timeless classic as there is. The original game published in 2000 has double-digit expansions released and continues to be played by new and experienced gamers alike. Today we are looking at a standalone spin-off, Carcassonne: Safari, that uses familiar mechanisms but with an animal safari theme and a few changes to how everything works.

Carcassonne: Safari is a tile laying game for 2-5 players. It plays in about 45 minutes and plays best at 4-5 players.

Like your favorite Carcassonne memories of the past, you’ll play Safari by simply drawing a tile and playing it to the table. Safari tiles have some features that are similar to the original game—bushes replace cities and trails replacing roads. There are also baobab trees that function somewhat like monasteries.

Safari also introduces rangers that are patrolling your trip. If you place a tile where a ranger is, you will score three additional points and you can then move the ranger jeep to any space adjacent to an existing tile.

The biggest difference is in Carcassonne: Safari you don’t score based on the number of tiles in a feature but rather the number of different animals present on that feature. Adding a trail tile with a giraffe to a trail that already has one won’t help you out in the long run—once you’ve seen a giraffe, they are all basically the same, I guess. Scoring increases quickly with additional animals, a bush with only one type of animal present scores a single point, but all five animals would score 15.

You’ll start the game with two animal tiles and those can be spent when scoring a feature to add to the number of animals considered to be present. Alternatively, if you don’t place a meeple after laying your tile, you can start a watering hole by placing an animal tile on an empty corner of any already played tile. Other players can also contribute to a watering hole with points increasing as it nears completion.

Carcassonne: Safari does enough different to stand on its own, outside of the shadow of one of the most popular board games to ever exist. But there is something to be said for messing with a formula that works so perfectly.

Original Carcassonne is often critiqued for how luck-driven the tile draw can be. You aren’t given a hand of tiles to choose from—whatever you draw you must play. Safari doesn’t change this but instead offers an alternative, if you play a tile without placing a meeple on it you get a consolation prize. Most often that prize is adding an animal to a watering hole, but you can also move the ranger to a new location.

The added economy of animal tiles is by far the best additional to Safari. They are hard to come by and getting additional ones requires sticking a meeple out on a baobab tree for goodness knows how long. But they can be extremely powerful not only when making watering holes but also to turn in when scoring features to increase the number of present animals.

There are two other changes which I was less fond of. The ranger mechanism is strange. In theory you can place the ranger in a way that it incentivizes other players to build in a certain spot or enrich yourself if you play there. At lowers play counts this is especially troublesome as you must take a turn off your own plan to stop your opponent from just keeping the ranger exactly where they want it for the entire game.

The next is the scoring changes. Honestly, it’s a mixed bag. I like the added decision points as adding a duplicate animal may not score you additional points, but it can help finish features, for you or your opponents, as you see fit. But it limits the “holy cow, how long is that road?” moments that I really enjoy from Carcassonne. There is a well-defined limit to how many points any individual feature will score you.

There is also no scoring at all that is similar to how farmers work. While this complexity may not be needed, it takes a lot of the pressure off making sure you have plenty of meeples available. You don’t have to make any decisions about trying to get a farmer down early at the expense of long-term flexibility.

If you are a lover of Carcassonne, you will certainly enjoy what Carcassonne Safari has to offer. It’s a fun twist to try something different than your standard game. Most gamers, I’m guessing, have Carcassonne in their collection largely gathering dust and brought out on the rare occasion you need a gateway for a new group. If that accurately describes you, I’m not sure Carcassonne: Safari really does enough to be worthy of your hard-earned gaming dollar.

At the end of the day, Carcassonne Safari feels basically like playing Carcassonne. Some of the changes are neat and others I’d prefer the original. But nothing about it is going to make you excited about grabbing this off the shelf. And if you don’t own any version of Carcassonne, I’d still suggest picking up the original just because of the great amount of expansion content.

Final Score: 3 Stars – A fun twist on Carcassonne but isn’t better than the original. Best for a kid-friendly theme or hardcore Carc completionists.

Misses:
• Ranger mechanic is strange and doesn’t work well at low player counts.
• No farmer-like scoring at game end.
• Not much of a reason to own this over normal Carcassonne.