Board Game Review by: :
Tahsin Shamma

We review Spartacus: A Game of Blood and Treachery from Gale Force 9. In Spartacus, players take on the role of managers sending their gladiators into the arena to fight. 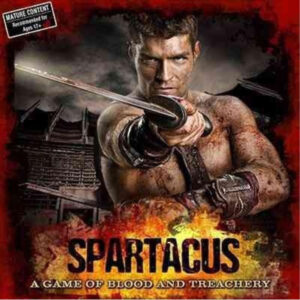 Whatever readers feel about board game themes of ancient times, it’s undeniable that often the conquest of people external to one’s own group often resulted in their enslavement. The Romans and other contemporaneous civilizations saw other cultures as inferior, and their enslavement was seen as a natural outcome of conflict. Couple this with the Roman fascination with violent gladiatorial games and you have a situation where women and men were used, often violently, for the pleasure and sport of others.

This should be kept in mind with this game review because, even though it is a game and none of the players are actually doing the things described on the cards or in the rules, this may be unpalatable to a certain game audience. Indeed, if the thought of owning slaves in a game is something distasteful to readers, they should just stop reading this review.

If, however, thematic elements are beside the point and readers just want to know if this is a good game, it’s best to first know that Spartacus: A Game of Blood and Treachery (Spartacus) is for the narrow player count of 3-4. In addition, a playtime of 2-3 hours is pretty accurate.

The Intrigue Phase is where much of the betrayal of the game occurs. Players will draw 3 Intrigue cards to begin the phase, and then take turns playing cards once around the table. Depending on turn order, players will likely want to play aggressively or defensively using Reaction and Guard cards to fend off the “Schemes” played by other players.

Once players are done scheming, the Market Phase encourages the negotiation part of the game. Players are free to trade “Asset” cards with each other in open communication. These could be slaves (often women), gladiators, equipment, and gold. After trading, three new assets are revealed and auctioned through concealed bids. Finally, players will bid on hosting the next arena combat. This is a concealed bid not only for gaining preferential status during the Arena Phase but also to be the first player in turn order during the next Intrigue Phase as well as gaining 1 Influence.

During the Arena Phase, the Host player invites two other players (the Host can also select themselves) one at a time to participate in combat. A player may decline, but then they lose an influence point. If they accept, they offer up a gladiator or slave to fight in the Arena.

Combat occurs next with each player gathering the needed dice based on their chosen participant. The resolution system is pretty straightforward and is similar to how RISK resolves conflict. In addition, a combatant’s speed determines the number of dice they roll for Initiative to see who can attack first.

Dice are rolled simultaneously, and attack dice are compared against defense dice. The highest die of each color is compared to determine hits, but any attack die must be at least value 3 to hit. When a player’s combatant takes a hit, they lose one of their dice. If they lose all the dice of one type, the combatant is defeated. The hosting player might also decide the losing combatant deserves to die using a “thumbs down”. The result of any combat is that the winning player gains 1 Influence.

However, another aspect of combat is the betting which takes place during the Arena phase. Players can not only bet on who wins, but also in what manner. If a player manages to completely decapitate their opponent with a series of high die rolls (no more dice of any type remaining), the winnings for that outcome is double the bet.

Overall, the main way players will gain Influence is through hosting the Arena combat and having a winning gladiator. If they can manage to stave off the schemes and attacks on the leader from other players, they could eventually achieve the 12 influence points needed to win the game.

As is monumentally obvious from the Gameplay Overview, Spartacus is not for everyone. Indeed, even for this reviewer who enjoys a dark theme as much as the next player, Spartacus walks right into the diegesis and settles in cozily. Given the social climate of today, that won’t work for every game group so players should consider this before playing with random people.

What’s also noteworthy is that while the game does have the title of Spartacus, the players are never actually moving into the side of the historical story where Spartacus led a slave revolt which also appears in seasons 2 and 3 of the TV show. The game centers firmly on the early content of the series where backstabbing Domini used their slaves in whatever manner they saw fit. Knowing that the show has a very adult rating, players will understand more of the game’s theme and allure here.

The real critical lack of enjoyment of Spartacus comes not from the theme, but from the lackluster gameplay which feels older than it is. This is beer and pretzels fare, but the pretzels won’t help. Negotiation skills are paramount until the cards don’t go in a player’s favor. The Intrigue card play is interesting until it becomes just another round with the same schemes played. And the arena combat can sometimes be painful with combats becoming a defensive roundel of outcomes. There isn’t even that much happening in combat besides opposed dice rolls despite having a huge hex grid of spaces.

The biggest assault on players here is the playtime caused by the Influence count needed to win. For a shorter game, players can lower this, but that would skew how some of the game content is played. In reality, for the style of game that it is and for the amount of narrative the game presents, this reviewer would expect no more than 90 minutes including setup. When a four-player game hits 3 hours, it really needs to be providing more than it does.

Spartacus (Season 1: Blood and Sand) is what Spartacus: A Game of Blood and Treachery is all about. Despite the ignoblest of intentions, the game fails mainly due to lackluster gameplay. While some of the back-stabbing and treachery can be fun, this is fleeting. Combine this with a long playtime and the experience feels like boarding school for slave masters. Since the game also misses the point of 2 out of 3 seasons of the show, it fails to live up to the revolution concept. What players are left with is a routine series of phases that doesn’t build up to any climax, just a dull, recumbent affair waiting for a player to hit the game end condition.

Final Score: 2.5 Stars – As exciting as it wants to be, Spartacus doesn’t achieve much to capture the imagination unless the bar here is just to represent Season 1 of the source material.

Misses:
• Fails to truly capture the IP
• Mediocre combat
• Feels more like a game design from the 1980s