Board Game Review by: :
Andrew Smith

We review Sonora, a "flick and write" board game published by Pandasaurus Games. In Sonora, players are flicking discs onto a central board and then using the results to score in four different areas. 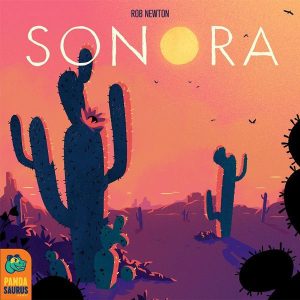 We’ve rolled dice and wrote. We’ve drawn cards and drawn. But today, we aren’t doing any of those things. We are flicking and filling! In a left turn I never really anticipated, the explosion of roll-and-writes has inspired a Crokinole-like wonder called Sonora from Pandasaurus Games.

Can dexterity really work as the semi-randomized input for the X-and-write genre? Well let’s take a quick look at how it works and find out.

Sonora comes with a game board and is broken into four scoring sections, with a Crokinole-like recessed area in the center. You’ll have five wooden discs, numbered one through five, and on your turn, you’ll flick any two of them from your corner of the board. If it lands in the center hole you can immediately remove it and assign it to any of the four sections. There are also bonus spots on the board that double the value of any disc that touches them. On your third flicking turn each round, you’ll obviously only have one disc left to flick. Any discs that leave the board completely are removed for the round.

Once all the dust has settled, you’ll move into the “-and-write” portion of Sonora. Each of the four board zones corresponds to a zone on your score sheet that all score in different ways. You’ll start with the Cliff-dweller area. You’ll sum up any discs in the cliffs area (plus any bonus spots) and then mark off that number of hexagons on their sheet. The cliff-dweller hexagons are in different sized groups and when you complete a group, you’ll score the points for it (and potentially get a bonus action). Anyone who completes the same area later will score a smaller number of points.

You’ll then resolve the rest of the areas. The Canyon will have you drawing Tetris-like shapes around a grid, hoping to mark off various types of cacti and gaining bonus abilities. In the Creek Bed you’ll mark off several spaces down the path based on the value of your disc and then circle the next space, getting that bonus of scoring its points. And finally, the Mudcracks you’ll again sum the value of discs for that region and mark off nodes on the desert floor. When you’ve marked off adjacent nodes, you’ll draw lines between them, hoping to completely close off areas to score points.

All these areas also have bonuses you can unlock that will allow you to reflick, swap the positions of your discs after the flicking phase, or taking additional actions in the various zones on the board. Sonora can be played anywhere from 5-7 rounds, depending on your preferred length, and then players will total the points and see who wins.

Just when I think that I’ve reached peak saturation of Yahtzee variants, something new happens. Full disclosure, I love Crokinole. I like most dexterity games, but Crokinole has the just amount of actual skill needed to really make it something you can play enough to get good at. But you can still have a lot of fun if you aren’t very good at it.

Does Sonora feel a lot like Crokinole? Not really. But I love trying to flick the disc I need in a particular zone to maximize my score. The Creek Bed is the pickiest, as you’ll mark off several spaces equal to the disc you are resolving and then circle the next space down the line. It branches off here and there, giving you lots of options. But if you are 2 spaces away from the bonus you need or the 10-point space, you really need to land the 1 value disc there to be able score it.

While the other sections don’t necessarily care, you don’t want to be wasteful. Partially completed sections in the cliff-dwellers are worthless. You can draw a shape from a lower value than the disc actually allows in the canyon, but that isn’t ideal. There is, most times, a certain reason you want each disc to land in a section. Or, if not, you can just shoot for the bonus areas to get double value out of your discs.

As the saying goes, “the best laid plans are often wrecked by other jerks flicking their discs.” Your carefully placed 1-disc may get knocked around, especially if you flick it early. Save it for last and the once easy shot into the creek bed may now be filled with obstacles in your path. I don’t want to give the impression that Sonora is a game of carefully planned and well-made shots. It at least allows you to think so while being a whirlwind of discs bouncing around.

The writing portion of the game is certainly the less exciting part. To draw a comparison to baseball, the “flicking” is playing the game and the “writing” is being the person who is entering all the information into the scorebook. (No hate from me, I like keeping score at baseball games.) The decisions at that point are pretty easy. There is the occasional thought of trying to determine if you should go for a bonus or try just gathering all the points, but it mostly takes care of itself.

I would say the variable length kind of throws me for a loop. I’ve played the short game more than any other length and it seems like the perfect amount. More rounds doesn’t change the strategy too much in any way that I’ve found… and again, it’s more art than science here… so I think keeping it short makes for the most fun experience.

I’ve recently pared my collection of roll-and-writes considerably. Having dozens just doesn’t make a lot of sense when there are always the same handful that get played. Even those that did something a little bit new—like the combo mechanism in That’s So Clever—just feels like a tweak to the formula. Sonora is more of a paradigm shift.

Dexterity games can range from very skill-based to complete chaos. Sonora walks this line by making the shots themselves pretty easy to make, allowing the chaos of other players moving you around adds an uncontrollable element, and gives you an easy way to tally up the points. While I wish the writing portion had some more interesting decisions to make, it’s a great package and one that gamers will enjoy breaking out.

Final Score: 4 Stars – A fresh take on pen-and-paper games. The flicking is just the right amount of controlled chaos.

Hits:
• Dexterity in your roll-and-write games!
• Wonderful production of the board and dry erase player mats.
• The scoring method means you’ll often have something specific to aim for.

Misses:
• The writing portion of the game solves itself most of the time.
• Not sure why anyone would play longer than 5 rounds.